Corruption undermines representative democracy:In countries with a system of elected representatives entrusted with decision-making power, corruption enables wealthy individuals or institutions to wield disproportionate influence in national, provincial and local politics. This can be the result of buying citizens’ votes in elections or of buying the votes of parliamentary representatives on matters such as taxation, distribution of public resources, regulation of business, or even foreign policy.

Corruption also violates economic and social rights by denying equitable access topublic services such as health and education, placing obstacles in the way of earning alivelihood in the public or private sector and, as mentioned above, by distorting decision-making processes regarding the allocation of resources.

Corruption affects poor people the most as they are the most vulnerable. These ofteninclude women, children, the elderly and those wrestling with chronic disease. Withoutresources at their disposal they simply have fewer options when confronting barriers toaccessing basic public services and other resources. They also tend to be most affectedby the misallocation of public resources and the resulting inhibited economic development.Programmes to combat poverty are also adversely affected by corruption andare thus made ineffective

Corruption is a barrier to economic development

Corruption is a barrier to economic development : Corruption acts as a barrier to development by distorting public spending, undermining efficiency and discouraging investment and growth. It thwarts efforts by the private sector to take advantage of business and growth opportunities and undermines economic competition.

Corruption is a tool of organised crime

Corruption is a cause of environmental damage

The National Commission for the Protection of Public Property in Morocco (INPBPM) is a Rabat-based organization dedicated to safeguarding Morocco’s land resources and heritage from corruption, misappropriation, or illegal monopolization by means of “confronting those who are corrupt or corruptible regardless of their social status

inpbpm :The Corruption of Principles and the Decline of the State

Few laws are not good when the State has not lost its principles; and, as Epicurus relates in speaking of wealth: “It is not the liquor which has become corrupted, but the vessel that holds it.”

The Corruption of Principles and the Decline of the State[1]

Posté par inpbpm à 01:20 - inpbpm anti Corruption - Permalien [#]
Tags : inpbpm The Corruption of Principles and the Decline of the State 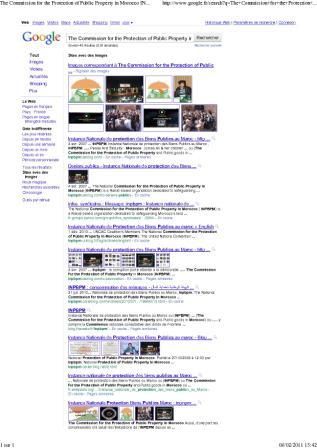